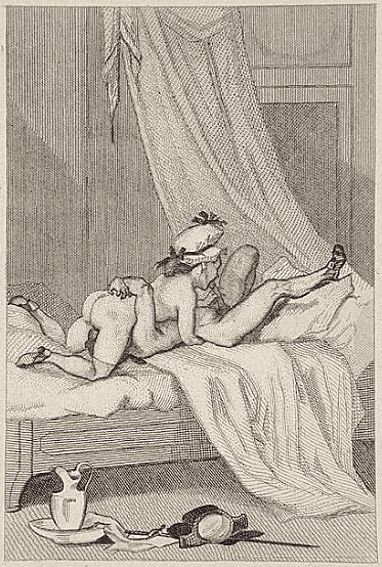 The Chevalier kept looking up and down the hall as he crouched outside the bedroom door. Yesterday he had hidden behind a tapestry in the Prince’s chambers, hung over an alcove where a statue had stood. Piled into a little nest were cushions, blankets, and a bottle of brandy. His cock had grown hard with the knowledge that the Prince wanted him to spy on his new bride. Each time the Prince turned to where the Chevalier hid, his dick became harder.

The Prince performed for him. He angled his wife so he could appreciate her milk skin, full breasts, and generous curves. First, the Prince pressed his mouth to her pussy, and the golden curls of his head blended with the Princess’ pubic hair. The Chevalier eased his cock from his breeches and just held it while he watched the Princess writhe. As he thought of the Prince’s soft tongue dipping in and out of the Princess, he started thrusting into his hand, quick little jerks. Raising his head from his wife’s sex, the Prince turned to the tapestry and licked his lips before thrusting his fingers inside of the Princess. This time when he bent his head to her, her legs kicked and he had to hold her hips still. A moan, an “Oh God”, a long indrawn breath, and the Princess came, her hips bucking up against the Prince’s mouth.

As soon as he heard the Prince speak of returning to Paris, he scurried off to a little parlor. The Prince would be resting after his exertions, and he could take his time here. Reaching into his breeches, he fondled his testicles. The door opened and his heart stopped—it was the Prince.

He carefully locked the door behind him, and the Chevalier grew harder under his blue gaze. Turning back to the fireplace, the Chevalier said, “Congratulations on your marriage.”

The Prince came to stand beside the him. He was surprised to see the Prince was also aroused. The Chevalier began rubbing the head of his dick.

“So you were watching?” the Prince said.

“I watched last night. Tonight I was listening outside the door.”

He moaned as the Prince reached into his breeches to withdraw his own hard cock. The Prince looked the Chevalier in the eye as he began to stroke himself.

The Chevalier was overcome, leaning his forearm against the mantle. The Prince looked down to see the Chevalier’s shaking hand gripping his cock.

“Do you like that I am watching you?” the Prince asked.

“Will you watch me when you’re finished?”

“Nothing would please me more,” the Chevalier whispered. He pushed his breeches down his hips, exposing more of himself to the Prince.

“Would you like me to touch you?” the Prince asked, moving his hand closer to the Chevalier.

He jumped away and stammered, “No…no, but thank you.” He felt himself fail for a moment, but the Prince’s blushes and bright eyes restored him. His hand jerked over his cock. Instead of watching, someone was watching him, and it felt good. When he came, his toes cracked as they curled in his boots.

All the while, the Prince had been standing there, slowly caressing himself. The Chevalier looked at him and the Prince smiled. “Would you like to touch me?”

The Chevalier stepped closer, then reached out to touch the Prince’s lips.

The Prince kissed the Chevalier’s fingertips. A whiff of sage came from his skin. His whole body shook as he rubbed himself. The Chevalier ran his fingers through his silken locks. The Prince had his eyes closed and his brow furrowed as he spent himself in the fireplace.

The Chevalier kissed the Prince’s cheek. Then, he tried to flee, but found the door locked. He stood there, sheepishly staring at his feet. When the Prince unlocked the door, he ran from the manor back to his home.

He lay on his bed, his chest heaving. It was the first time he had touched someone. He had always fled from the girls when he was younger. There was no way for him for him to explain to them that their caresses meant nothing. The only time he felt any excitement was when he nestled himself deep in a closet and watched them as they darned socks and chattered. His mother often caught him touching himself, and beat him every time, which did no good. He only discovered that risk heightened his excitement.

Now, with the Prince, he did not know what to do. He had wanted to let the Prince touch him, but he was afraid. He reached down to rub his anus, fantasizing it was the Prince’s fingers. He was surprised to find himself growing erect. For the first time in his life, he touched himself thinking about a person rather than watching one. He grunted, making a mess on his stomach.

The Prince and Rosalind wedded, the Marechal and the Duke circling like wolves, and the Chevalier to watch it all. It was going to be chaos, all these affairs. His joints would be aching from the hours he would spend folded up in closets, hiding.