Squeeee! She knows how I feel: 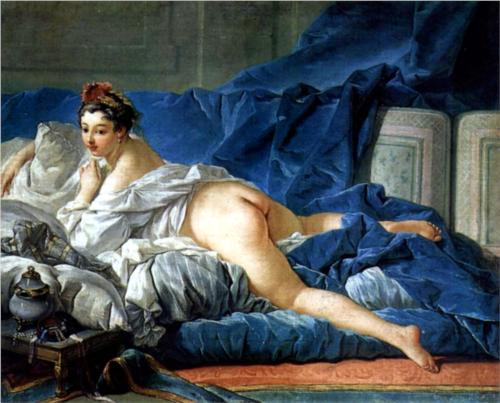 So, this was supposed to be a quick post, a thank you and a hurray, but it’s not turning out that way, so before I digress even more, I’d like to say thank you to the gentleman who sent a note, and to all those on Literotica who have been commenting, voting, and even just reading my pervy Princess of Cleves, because it makes me happy people are enjoying my work.

Still interested? Read about my journey from joy, to despair, and back to joy, and why I’m a fan of Literotica.

I was really pumped when I first wrote The Princess of Cleves. Having read St. Simon, Mme. Sevigne, and the Abbe de Choisy, I felt comfortable rewriting a novel set in the time of Louis XIV. That la Fayette was rolling her grave was only an added bonus.

She was famous in her time for her salons, and her novel, The Princess of Cleves, produced quite a stir when first published, and still pops up in the news today. Recently, after making negative comments about the book, Nicolas Sarkozy sparked public readings of the novel in protest to his proposals in 2009.

In her book, Strange Revelations, Lynn Wood Mollenauer quotes it often, which is what first piqued my curiosity. Mollenauer talks about the Shadow Court of Versailles, whereby women, as mistresses to powerful men, gained power. La Fayette herself says:
Ambition and gallantry were the soul of the Court, and employed both sexes equally . . . . that love was always mixed with business and business with love . . . .
The Princess of Cleves
While ostensibly set in the time of Henri II, it is without a doubt Louis XIV’s court. Gallantry here does not mean tales like that of Galahad and the Holy Grail either, but the rather the affair Lancelot had with Guinevere.

The plot itself revolves wholey around court intrigue. The King wants England (Elizabeth, the Virgin Queen, had just been crowned) and thinks the Duke de Nemours is the man to get it. The Princess is in love with the Duke de Nemours and jealous of the new Queen. A portrait of the Princess goes missing, a love letter is found, in death a betrayal is revealed. Good stuff for a girl who loves politics.

While I enjoyed the book, I was bothered by everyone’s treatment of the Princess of Cleves. In the original novel, she’s 16 (in my smut she’s 18 of course). She’s constantly chastised for her emotions, and suffers immensely because she falls in love with the Duke (hell her husband dies of a broken heart because he suspects an affair), though she did her best not to.

In a way, rewriting this novel was my way of giving her a happy ending, or really, many happy endings. After all, I was writing erotica, and her love of the Duke could not remain unconsummated. For that matter, in addition to her husband, the Prince of Cleves, and the Duke, she had two other admirers, the Marechal of St. Andre and the Chevalier of Guise. Shouldn’t they have fun too?

So, to a plot that revolved around intrigue, I expanded the role of two characters and added a whole a lot of affairs. At this point, the story was getting a little unwieldy, and I changed every miscellaneous male to the Prince of Conde.

At this point I had a few people beta-read for me, and they weren’t as in love with my Princess as I. That’s perfectly natural. A lot of the feedback had to do with all the confusion about the names, so I worked toward shortening the Duke de Nemours to the Duke, and the Queen-Dauphin (an odd moniker anyways, from the Gutenberg translation) to Princess Mary (quite contrary–for it is Mary Queen of Scots in the novel). But some of that too was just the novel itself. It is a bit unwieldy in the way classics often are. It’s not that they’re not rewarding works, but unless you’re used to modern epic fantasy (or old school romances) it can be a bit of work keeping it all straight.

Needless to say, not what most people are looking for when they pick up an erotica. Ultimately, I decided no one would probably want to read the damn thing let alone buy it. I excised a few pieces, cleaned them up, and sent them off to some anthology (it paid $20 and a copy of the book, assuming I got in). The leftover bits, whose word length didn’t work, or weren’t as thematically appropriate, I started posting here. On a whim, I posted a hunk to r/erotica.

Imagine my surprise when people were reading it, and even seemed to like it. At that point, I decided to put it on Literotica. The snippets were rejected because they thought I was just putting out teasers. Then, the first chapter was rejected, because she starts out 16, and I didn’t emphasize her turning 18 enough. Finally, it was accepted.

And, much to my surprise, people seem to like it. It’s generally pulling around a 4 out of 5, which is awesome. I’ve been getting supportive comments, even a little encouraging note, right in my inbox. My odd little book has found a group of people who genuinely like her. I don’t have to vivisect out all her sexy bits for her to be any good, she worked as an novel.

I am tickled pink.

4 thoughts on “I got a Literotica fan letter!”